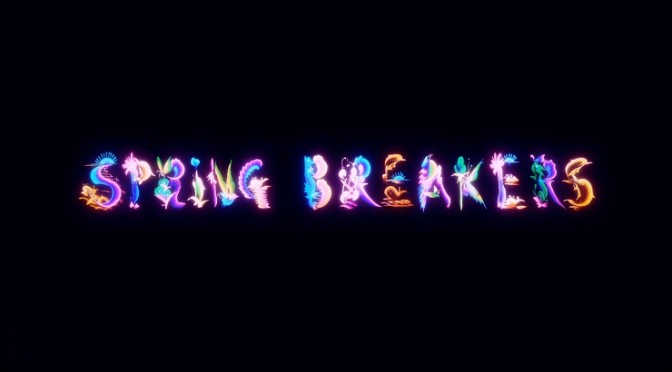 Spring Breakers begins with a prologue straight out of a music video, all young flesh and abrasive beats. A common complaint from detractors of the movie is that its frenetic, flashy, leering style makes the whole piece feel not radically different from an episode of MTV’s The Grind. This is an intensely euphoric opening, full of lusty women and arrogant men. Hordes of scantily clad girls and testosterone-addled guys are grinding, thrusting, and exposing themselves along the beaches of St. Petersburg, Florida, as a Skrillex track blares and scratches along with them. We cannot hear voices above the throbbing techno beat, but everyone appears to be caught up in a drunken ecstasy that borders on spiritual. Some of the girls wrap their mouths suggestively around the tips of red-white-and-blue popsicles. In a few minutes, however, this frenzied vision passes and we find ourselves on a quiet, anonymous college campus, far away from all those half-nude, writhing bodies. We have woken up in the real world of droning professors and suburban houses, but we sense that feverish vision was very real and is still out there, waiting for us. Some might call Spring Breakers a music video but, as imagined by director Harmony Korine, the beaches seen in so many MTV specials take on a fantastic, almost mythical quality. This is the land of Spring Break, a beautiful, undulating dream and a flamboyant, vulgar nightmare. It is an insidious and seductive American promised land, alluring and morally bankrupt and bathed in every shade of neon. And it is always out there.

Back on campus, we meet our protagonists, four young college girls. They are experiencing the time so many adults look back on as the “best years”, but they only see a sucking emptiness. To them, the idyllic, carefree college life is little more than a dismal cycle of classes and small-scale social gatherings, there to prepare for them for the prolonged tedium of adulthood. They may look like the progeny of Ke$ha and Paris Hilton, and in a sense they are, but they hunger for something no amount of sophomoric fraternity parties can provide. They want to light out for Florida and Spring Break because it represents the American Dream: untrammeled freedom in all its glorious excess. “We’re not going to be miserable,” one of them insists, but it looks like their best laid plans will be derailed by a lack of money. It appears the trip will end before it can begin, until three of the girls hatch a plan to rob a fried chicken shack. This is the beginning of their strange, gloriously tacky trip and the start of a recurring motif for the movie, in which reality throws a stumbling block in the girls’ way. Time after time, they must choose to either be reasonable or throw common sense a bratty, beer-soaked middle finger. Spring Breakers becomes the story of the monkeys jumping on the bed. As the trip descends into ever stranger and darker circles of American youth culture, some of the girls throw in the towel and head back for the cold comfort of home. Eventually, only the two most unhinged women remain, ready to take the despicable thrill of spring breaking to its illogical extreme. Spring Breakers is about riding the bucking bronco of shallow, sexy, materialistic youth until it finally shakes us loose and tears off into the night like a fluorescent werewolf. 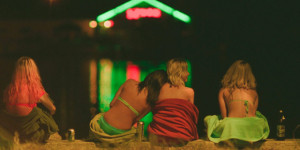 Spring Breakers is all about the women and their bikini-clad quest for inebriated escape, but a fascinating supporting character takes the reins in the second half and gives the film a well-timed jolt of gonzo humor and biting satire. When the girls are arrested for using cocaine at a party, they are unable to post bail and have no choice but to watch their trip dwindle away from behind bars. But unexpected salvation comes in the form of Alien, an enterprising drug dealer, white rapper, and self-proclaimed “gangster with a heart of gold”. He takes an intense interest in the girls and offers himself up to them as a kind of blingy sherpa. Like the film, Alien is a seemingly shallow reflection of popular culture, but a bruised human soul peers out from behind his grill and aviator shades. In a career that includes subtle supporting work in Milk and a charismatically underplayed solo turn in 127 Hours, I believe Alien is the most thoughtful, brave, and shrewdly insightful human being James Franco has ever created. Beneath Alien’s gun-toting hustler persona is a vulnerable, self-loathing man-child, and beneath that are even more alternating layers of pop-culture posturing and childlike frailty. Introduced as a potential Big Bad Wolf, he quickly becomes something infinitely richer, sadder, and funnier. Like much of Spring Breakers, there is an unnerving surface sheen to Alien. He wears his libidinous impulses on the sleeve of his unbuttoned Tommy Bahama shirt, but there is a soulful, gnawing need for spiritual fulfillment beneath the surface. The girls are our heroes through this Odyssey but Alien is the soul of the film, a vulnerable ball of hope and earnest ambition hiding just below the film’s candy shell. He has his arms wrapped around his own vision of the Dream, one that has been passed down to him through his own urban upbringing and through the wild refracting prism of gangster culture. He is the perfect horny, pathetically sincere face for a movie that locates beauty beneath the glossy shell of youth and finds unexpected value in the shell too.

Going into Spring Breakers, I feared I might encounter the same flaws that plagued Kids, which Harmony Korine wrote back in 1995. I found that film to be a potent window into adolescent issues, but it also felt shrilly melodramatic, with an adult’s misperception of the young. Kids was a parent’s neurotic fever dream, where America’s sons and daughters willingly plunged themselves into a juvenile Dante’s Inferno of booze, violence, drugs, rape, AIDS, and every other imaginable vice that existed in the 1990s. It was a vivid piece of provocateur cinema, but that is also what kept me at a distance from it. Amid the visions of parties gone horribly wrong and young men resorting to brutality at the smallest provocation, there was a hollow space where some kind of empathy should have been. There was no real sense of why these youths were pursuing their own destruction with such ferocious resolve. Kids was not really about the lives of young people in the 1990s, but more a poetic expression of the mindset of an older generation that was at a Ioss to understand them. I think Korine wrote a kind of sensationalistic ghost story for middle-aged people, tapping into all their most primal fears about their inscrutable successors. Even if it was subversively critiquing the caricature of youth it presented, it was all too easy to view Kids as a hysterical State of the Young Nation, prophesying a land blighted by callous punks and STD’s.

Spring Breakers represents a mature step forward for a Harmony Korine because it sees the social ills in modern youth culture, but consistently understands and empathizes with the tenacious, if foolhardy, appetites of youth. Korine well knows the dangers that face these young women, but he always remains on their side and fiercely defensive of their decisions. He has once again made a film about the fears and prejudices adults have toward young adults, but he has also crafted a buzzing ode to the wild, uninhibited spirit of gleeful materialism. Spring Breakers may be the year’s most skillful balancing act because it shows the sexism and vice young women face, but also sneers at anyone who would view them as babes in the woods, oblivious to the wolves around them. Korine presents a belligerent, pop-tinged incarnation of the American Dream, steeped in animalistic lust, insatiable greed, and sinister misogyny. And yet, he sees it all as a celebration of the right to be stupid, drunk, promiscuous, and criminally insane. Even if the Dream is rotten and chauvinistic at its core, there is something intoxicating and perversely inspiring in its restlessness. What the girls hope to find on the beaches of Florida is their own shining, spray-tanned frontier. And we are compelled to gaze upon them with awe, admiration, and even respect for having the conviction to chase the gaudy bastard as far as they possibly can.