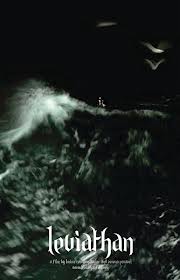 2013 was filled to bursting with worthy documentaries. Many were good (20 Feet From Stardom, Blackfish, Sound City), but a select handful deserve to be called ground-breaking. Two such documentaries can be found higher up on my year-end list, but I do not know if either of them can match the full-tilt, maniacal boldness of Lucien Castaing-Taylor and Verena Paravel’s Leviathan. If Upstream Color is uncompromising for its sheer brazen commitment to sensory overload, well, at least it has characters, dialogue, and something resembling a linear story, even if it frequently chops up that line and throws pieces of it in the trash. Leviathan, on the other hand, consists of essentially no dialogue, no characters we come to know, and no story outside of whatever images it clinically and dispassionately observes. But who needs dialogue when you have the lonely, anguished howl of the Atlantic Ocean? Who needs characters when you have a sinister sky full of hungry seabirds screaming in ravenous unison? For God’s sake, who has the audacity to demand narrative from a nightmare? At its heart, Leviathan is what a documentary would look like if it were filmed by H.P. Lovecraft and then pressed between the bleakest pages of the Old Testament. The entire film takes place aboard a commercial fishing boat in the mercurial waters off the coast of New Bedford, Massachusetts, where small cutting edge cameras capture every inch of the vessel and the various lifeforms (humans included) that survive and perish in its wake. 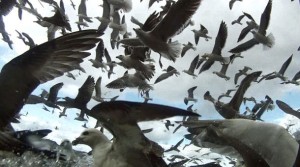 Just as with Upstream Color, it is easier to say what Leviathan is than what it is about; a fact which here works to the film’s benefit rather than its detriment. The film begins with words from the Book of Job, stating that God made the oceans to boil like a pot. The last words we see on the screen are: “Upon Earth, there is not His like, who is made without Fear.” In this film, Fear will be a constant companion. The blackness of that title screen soon gives way to blackness of an entirely more chilly kind, as we find ourselves squinting into the impenetrable black of an early Massachusetts morning. For a few seconds, we can only hear the wind whipping about us, but before long we begin to hear the faint hum of the boat and see its lights glint through the darkness. In short time, we find ourselves alongside the ship, dangling from one of its chains as it is pulled out of the frigid waters only to be dropped into the depths again. Sometimes we stare up at the hordes of winged beasts flying relentlessly after the small vessel, while at other times we peer down into the choppy, ink-black waters of an inhospitable sea. In the film’s closing credits, the filmmakers dedicate their piece to the countless vessels that have been swallowed whole by those very waters. The film is told purely in visual terms and its chief thrust is to place us on something as ordinary as a fishing boat and then mine that seemingly banal setting for some of the most beautifully stark and nihilistic imagery you will ever see on screen. The filmmakers depict the ocean as a dread-tinged realm of bloody domination, where even the human beings seem less like fellow men and more like lonely creatures laboring away in the deepest mines of a desolate netherworld. Their eyes, nestled in puffy, weathered skin, stare straight forward at the task in front of them, shrouded in equal traces of boredom and bone-deep fatigue.

One of the most notable qualities of the film is how it hurls us into a whirring, roaring, heaving night of the soul without ever providing any one clear perspective to guide our experience. As viewers, we sometimes feel like fishermen ourselves, surrounded on all sides by the otherworldly din of the machinery and the banshee wail of the North Atlantic. At times we may be the machinery itself, whipping up to the mast and down to the deck and into the freezing waves. In one sequence, a camera is positioned just outside of the ship’s hull as it rises and dips into the choppy surf. Each time it tears itself above the water, it makes great sucking noises like a man working desperately to keep from drowning. Most of all, I think the filmmakers want us to become fish, to become the terrified, helpless prey of this grey, rattling nightmare world, helplessly stuck between a man’s hook and a gull’s beak. 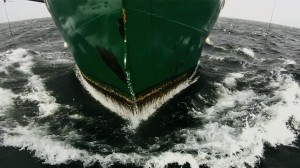 In what is maybe the film’s most famous shot, a net full of fish is dumped onto the deck and fenced off until the hapless catch can be dealt with. As the ship rocks back and forth, one poor fish lays on its back with its eyes literally bulging out of its head. It takes great fitful gasps, repeatedly sliding into the camera and then away from it again. Before too long, a duo of burly men show up with machetes and methodically reduce the poor beings into lifeless meat. The sudden spurts of red blood and viscera are jarring not only for how quickly and casually they appear, but also because they are the first true bursts of full, vibrant color that we have seen amidst this charcoal landscape. The wooden slats of the box where the new catch is kept are so utterly painted in fresh blood that we no longer see the spaces between them. Moments later, the men hack through dozens of stingrays as if they were thin slices of ham. Those still alive lay on their backs with their eerie little mouths opening and closing like sinners desperately murmuring a last prayer. 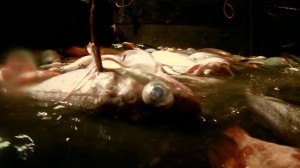 None of this seems intended to act as any kind of rebuke to the practice of commercial fishing itself, but rather to marvel at a lifestyle so brutal and bloody that it could have been extracted from the amber of an ancient time. Every haunted frame, whether of man, machine, or beast, radiates such an ageless sense of prehistoric cruelty that it seems plucked from the pages of a tome excavated out of some primeval cellar. Sometimes we see a sight that is almost ecstatic in its horror, as when sunlight shines through a swirl of blood and starfish just below the surface of the water, and the entire frame becomes awash in pink, watery light. Many times, we fly between the sea and the raptor-pocked sky so rapidly that we do not know which elemental predator we would rather succumb to. Leviathan understands death as a swift and constant force in the small universe of the fishing vessel. As we move from sea to stern to blood-stained deck, and even down into the lower quarters, where we can hear the bad early morning TV and smell the old coffee grounds, we stare into a lot of faces. Each one shoots back only the most basic and instinctive of emotions: hunger, terror, exhaustion. And any time we break away from the ship in all its tedium and grotesquerie, we return to the icy kiss of that black ocean, the ashen cloak of that unfriendly sky, and what Werner Herzog calls the overwhelming indifference of nature. When the film ends just as rapidly as it began, with the brackish brine rising once last time to engulf us, we finally surrender our trembling, battered psyches to the snarling maw of a forsaken planet. Turns out it was Earth all along.