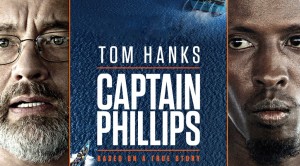 Captain Phillips begins with its most unnecessary scene, as Richard Phillips (Tom Hanks) is dropped off at the airport by his wife (Catherine Keener). Phillips has been asked to spend a number of weeks on the U.S.S. Maersk Alabama, delivering food parcels along the East African coast. In the car, husband and wife discuss how the world is becoming more merciless and competitive. Hanks pontificates that it will be harder for their children to find their way in the world then it was for them, but of course one thing that will not change is that they will still presumably exist within a system where it is good to be white and American. This all feels conspicuously placed to set us up for our fateful introduction to the Somalian pirates who will eventually hijack Phillips’ ship. We will soon learn these young men are forced to make their own tough choices in life in order to survive within a system that is many times more draconian than the post-recession America that so concerns Phillips and his spouse.

Captain Phillips becomes truly interesting a scene later when we first bear witness to the conditions of Somalian life and when we first meet Muse, an exceptionally empathetic and nuanced portrait of how a true pirate might appear in the 21st century. In a revelatory debut turn by newcomer Barkhad Abdi, Muse is an emaciated avatar of malnourishment, fatigue, and the kind of unblinking pragmatism that only the threat of starvation can create. Muse is gaunt and we are at first taken aback that he even has the strength to stand on his own two feet. In a matter of moments, he has been selected as commander for one of two skiffs sent to hijack boats and collect money along the infamous Somali Basin. Most of what is collected is reserved for the warlords who extort Muse’s village. The tension between Muse’s frail appearance and his quietly intense ambition makes him one of the most realistic and compelling antagonists of recent years. A hungry predator can be all the more fearsome than a well-fed one, and Muse spends the first 15 minutes of the film communicating this unsettling truth almost entirely with his face.

In truth, director Paul Greengrass’ entire game with Captain Phillips seems to be to tear down and construct our conceptions of terrorism and heroism and to view them as nuanced ideologies within an enormous and complex geopolitical scheme. Early on, as the pirates are making their first advance against the U.S.S. Maersk Alabama, Muse is contrasted against the aggressive, egotistical commander of the second skiff, who repeatedly derides Muse with the nickname “Skinny” and behaves as if he is in charge of the entire operation. However, we soon come to see the emptiness of the man’s bluster. He starts to express reservations about continuing in pursuit of Phillips’ ship as conditions become more difficult. At this point, Muse knocks him out with a wrench and steals his engine, the better to complete the mission with only his own crew in tow. “I may be skinny,” he says, “but at least I’m not a coward.”

Greengrass wrestles with the roots of terrorism in a way that runs counter to ever so many Seagal and Schwarzanegger movies. The man Muse knocks out could have been any one in a long line of snarling, abrasive stereotypes that we see in countless generic kill-fests. Muse is a subtler model of criminal. He relishes the chance to succeed as a hijacker, and yet he does not have the conceited swagger of a man who derives any kind of thrill or sense of moral victory from the task. He conveys only the relief of a man who has secured himself a shitty job just in time to stave off starvation and who is deeply grateful to have created this opportunity for himself. This, quite simply, is what passes for upward mobility in the village of Eyl, Somalia. 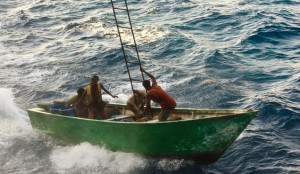 When the pirates finally board the Maersk Alabama, Captain Phillips becomes what those who followed the story on the news likely expected and hoped it would be: a terrific, tense action drama about how one man saved the lives of himself and his crew using nothing but resourcefulness and keen instincts. Oh, and the United States Navy, lest we forget! And, to be clear, Captain Phillips is the kind of classy, intelligent, emotionally satisfying action cinema that you would expect from the director of United 93 and The Bourne Ultimatum. It is thoughtful in its rapid editing, its minimal but effective score and in cinematography that stays on the right side of the line between visceral and schizophrenically jittery. Captain Phillips is a superb piece of kinetic moviemaking, with shoot-outs and fights in claustrophobic spaces and a shock-and-awe conclusion courtesy of the United States military.

And yet, the movie is also taken with very sad questions about the conditions that create global terrorism and the futility of trying to combat those conditions. In fact, the film’s dirty sucker punch is that all its action trappings are building up to a victory that leaves the viewer with surprisingly little to rejoice. Captain Phillips is a film where celebration is replaced with post-traumatic shock, where our bad guys are emaciated and hopelessly doomed. It feigns in the direction of a good action movie and then bowls us over with the right cross of devastating social commentary.

If there is a complaint to be leveled against the film, it may be that Greengrass is trying to have it both ways. Is there any hypocrisy in a film that identifies how superficial our discourse on terrorism is, while simultaneously cashing in on the visceral thrill of watching the “bad guys” get shot? Could a particularly jingoistic sort of person go into this movie and love it solely for its sleek displays of American military prowess? Could someone go to Captain Phillips just to get an adrenaline kick and completely miss its pleas that we look behind the unfortunate global realities that stoke terrorism? I suppose they could. To be honest, I even found myself wishing at times that Greengrass had humanized more of the pirates; that he had put as much empathy into the three others as he had put into Muse. Even though the entire ensemble gives fully committed performances, one of them does tip too often into a hot-headed reactionary terrorist archetype. That said, it’s hard to miss how Greengrass presents the Hobson’s choice facing these starving, desperate men, pressed between crushing poverty on the one side and oppression by greedy maniacs on the other. For my part, I do not find any hypocrisy in the fact that Greengrass makes his action rousing, because the final moments of the film convey such an unmistakable tone of hollow, even mournful, relief.

In the end, Captain Phillips works as both a pulse-pounding action drama and a sober examination of third world ills because Greengrass shrewdly uses the former to amplify the latter. On second viewing, I came to really appreciate the cagey magic trick Greengrass pulls off. The final moments of the conflict between the U.S. Navy and the beleaguered pirates drip with anxiety, as every technical aspect of the film works to simultaneously increase the tension. And then, with a lurch, all the sound and fury falls away and only the quiet, echoing aftermath remains. This, to me, is when the movie reveals its true nature. The purpose of all that terrifically tense editing has been to finally show the emptiness beneath the adrenaline kick.

Hanks truly does give some of the most impressive acting of his career in the final minutes of Captain Phillips, as he tries with a toddler’s stuttering futility to explain himself to the military nurse examining him. This is what heroism actually looks like. Real heroes are willing to journey to the precipice of death, but there are psychological consequences to that journey. There is an emotional toll to having our lives threatened and in bearing witness to the snuffing out of life. In the best moments of this film, Greengrass sees something frail and flawed and achingly human underneath heroism, the same way he sees those things underneath piracy. Captain Phillips looks under all the false padding of heroism and terrorism and replaces our easy conclusions with sad new perspectives. In the final shot we see the tiny lifeboat, the last bastion for the pirates, bobbing in the water with hulking Navy ships on every side of it. This reminds us that the outcome was never in question. You feel sad for having felt something like excitement about watching the world’s greatest navy massacre four starving men in a lifeboat. Both sides had to know the likely outcome of their showdown. The pirates chose to dance anyway.